The nose is typically the center of this remodeling.

The patients who undergo a profiloplasty often come for their nose, which usually seems too big. 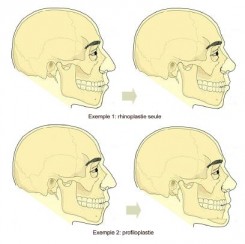 It takes place in an identical manner to that of a rhinoplasty, which itself includes the consideration of facial features.

What happens during a profiloplasty?

Many measures are taken to verify the harmony of the modified facial reliefs.

Each method of increasing or reducing is adapted in a very controlled and gradual way, whether it is the degree of bone advancement of prosthetic remodeling, or the amount of fat or injectable product used.

They are related to the surgical technique used (prostheses, lipofilling, injectables,...).

Depending on the procedure, there may be a small scar under the chin, or sometimes inside of the mouth.

When it involves an injection, there are no scars.