What is breast augmentation?

Why have breast augmentation surgery?

Breast implants increase the volume or size of the breasts. The prosthesis (or implant) - consists of a flexible silicone envelope and a filling material (silicone gel or saline) - and is placed behind the mammary gland.

The choice of the volume of the breast implants is done during the consultation, it is the result of an agreement between the desires of the patient and morphological constraints - analyzed by the surgeon, so that the result is as natural as possible.

It is also possible in some cases to increase the volume of the chest by lipofilling, that is to say, harvesting the fat from certain body parts (hips, buttocks, thighs, knees, stomach...) .

There are several ways to position the implants each with advantages and disadvantages:

The placement of the implants will be determined during the consultation, depending on your body type and the quality of your skin, but also the characteristics of your chest, the existence of ptosis, etc… 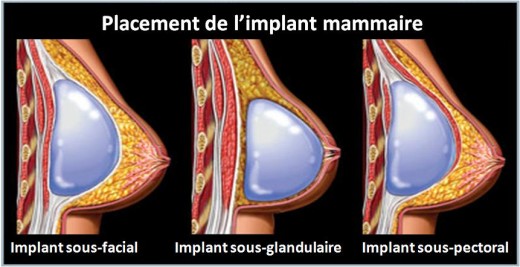 How does a breast augmentation take place?"]

Duration of the operation: 60-90 minutes

What happens after the intervention?

The risks of breast augmentation

Complications may happen in all breast surgery:

Rupture and deflation: such an incident occurs as a result of alteration of the envelope of the prosthesis (violent trauma, manufacturing defect, age of the prosthesis, wear). For a prosthesis containing saline, partial or total deflation, fast or slow results in a return of the breast to the initial volume. It is then necessary to change the prosthesis. For a pre-filled with silicone gel prosthesis, the gel remains mostly in the capsule that surrounds the implant (intracapsular leak). The leak has then no clinical translation. However, this can promote the onset of capsular contracture. Much more rarely, the leak can be extracapsular. It can be localized and give a foreign body granuloma, or diffuse in the whole breast. The implant must then be changed.

The scars of breast augmentation surgery

There are different possible locations for scars, they depend on where the prosthesis were inserted:

A transareolar access (just under the nipple in the middle of the areola) also exists, but I do not use it due to the permanent loss of nipple sensitivity that can occur.

Each of these scars has advantages and disadvantages: